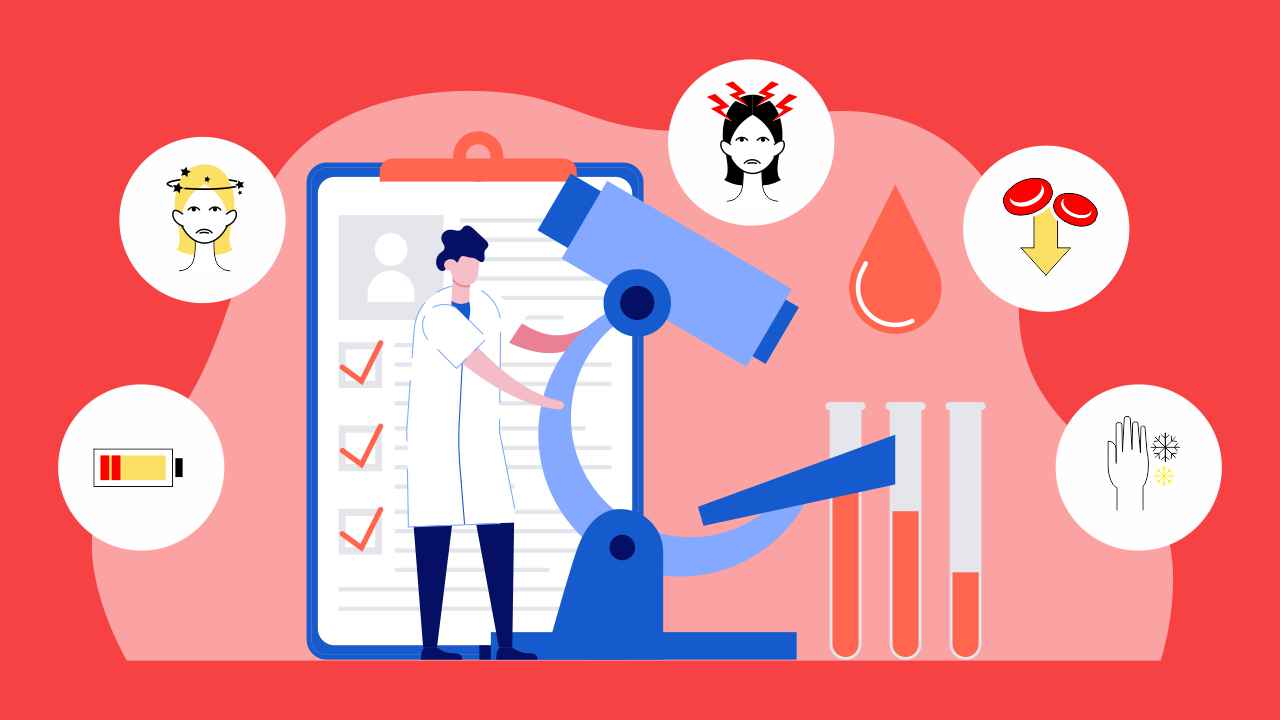 Anemia is a common blood disorder affecting 1.62 billion people globally. The most common form of anemia is iron deficiency anemia (IDA), which occurs if you do not have enough iron in your body. Mild levels of anemia are usually not a cause of concern and often the symptoms go unnoticed and untreated. However, if you’re feeling more tired than you usually do, have pale skin, and brittle nails, you might be anemic. Some people find out that they’re anemic when they go for blood donation.

Your blood consists of three types of cells — red blood cells (RBCs), white blood cells (WBCs), and platelets. These blood cells are formed in the bone marrow — a spongy tissue found inside many bones. Your bone marrow is constantly making new blood cells to replace those that have died or been destroyed.

There are many types of anemia, and depending on the severity and types, the treatment will vary.

To make enough hemoglobin and RBCs, your body needs iron, vitamin B12, folate, and small amounts of other vitamins and minerals. If you consume a diet poor in any of these nutrients, or have certain conditions that stop your body from absorbing nutrients from food, it can lead to anemia.

2. Destroying too many red blood cells

The natural lifespan of an RBC is 120 days, after which they are destroyed in the process of hemolysis. When RBCs are destroyed in larger numbers — more than what can be produced in the bone marrow — it can lead to anemia. Certain diseases, infections such as malaria, autoimmune disorders, cancers, certain medications, and blood transfusion reactions, can cause your body to destroy more RBCs than are produced.

3. Losing too many red blood cells

When you lose a large amount of blood, you lose a large number of RBCs. The loss of RBCs leads to low levels of iron in your body. Without enough iron, your body will make fewer RBCs than it needs, which can lead to anemia. Heavy menstrual bleeding, ulcers, severe injuries, childbirth, bleeding during surgery are some cases of blood loss.

What are the types of anemia?

Iron is an important mineral that constitutes a major component of hemoglobin, a type of protein that carries oxygen throughout your body. You need a regular source of iron to ensure that your body has enough to make the RBCs it needs. The main way you get iron is from the food you eat. But when the body cannot match the needs for iron either due to low supply or loss of iron such as in case of blood loss, it causes IDA. It is the most common nutritional deficiency worldwide and affects infants, adolescents, and pregnant women.

However, the anemia caused due to deficiency of intrinsic factor protein is called Pernicious anemia. Many diseases of the digestive system, alcoholism, surgeries of the guts and drugs, like anticancer and anti-epileptic medicines can also cause megaloblastic anemia.

RBCs are destroyed and removed from the bloodstream at the end of a normal lifespan. This process of breakdown of red blood cells is called hemolysis. Your bone marrow constantly makes new blood cells to replace the destroyed ones. However, sometimes, your body can’t make enough RBCs to replace the ones that are destroyed. This leads to lower-than-normal levels of RBCs in your body. This type of anemia is called hemolytic anemia and can be inherited or an acquired condition. For example, certain autoimmune diseases, exposure to toxins, medications, can signal your body to attack its own RBCs causing hemolysis.

Also, a lot of cells tend to get destroyed in diseases like malaria, cancer or as side-effects of certain medications like sulpha drugs.  Alternatively, you could carry a gene that causes abnormality in the structure and function of RBCs that could lead to its early breakdown. This may happen in diseases like thalassemia and sickle cell anemia.

This is a type of anemia that is caused by damaged bone marrow, which is unable to make enough red blood cells. It also may be congenital or acquired. Another name for aplastic anemia is bone marrow aplasia (failure). This may be caused either due to genetic defects or as a result of diseases like leukemias, exposure to harmful radiations, certain infections, or as a side-effect of few medicines.

Signs and symptoms of anemia

Symptoms of anemia can range from mild to severe, depending on the cause. Mild anemia generally has no obvious signs and symptoms but as anemia worsens the symptoms may become severe. Few of the common symptoms of anemia are:

The good news about anemia is that it is often easily treated. Your treatment will depend on your type and severity of anemia.

The two most common ways to treat IDA are dietary changes and iron supplements. Incorporating iron-rich foods in your diet such as green leafy vegetables, seeds, turkey, red meat, soybeans, fortified breakfast cereals, oyster, and spirulina, can help improve levels of iron. Additionally, getting enough intake of Vitamin C is also important as it helps with the absorption of iron. Over-the-counter iron supplements can also be consumed under medical supervision to build up the body’s iron reserves.

Treatment of pernicious anemia is similar to IDA, which is by making dietary changes and incorporating supplements. Vitamin B12 is naturally found in many animal sources such as dairy products, seafood, eggs, poultry, and meat. Also, certain foods that are fortified with Vitamin B12 are breads and cereals.

Aplastic anemia is treated with a combination of blood transfusions, medicines, blood and bone marrow stem cell transplants, and lifestyle changes. Treatment focuses on stimulating bone marrow to make RBCs, bringing up blood cell count and preventing any complications of the immune system.

Treatment for hemolytic anemia includes treating infections, taking medications that suppress your immune system in certain cases, blood transfusions, and specific measures aimed at treating the cause of anemia.

Can you prevent anemia?

Few types of anemia, such as those that are inherited, cannot be prevented. However, you can prevent anemia caused by vitamin deficiency and iron deficiency by eating a diet that includes a variety of vitamins and minerals. This includes:

Also read: Micronutrients: Vitamins, Minerals and the Role They Play

You can help control and prevent anemia by making good lifestyle choices. If you experience symptoms similar to anemia, it is best not to self-diagnose. Rather, visit a dietician or a physician who can advise the right treatment for you.