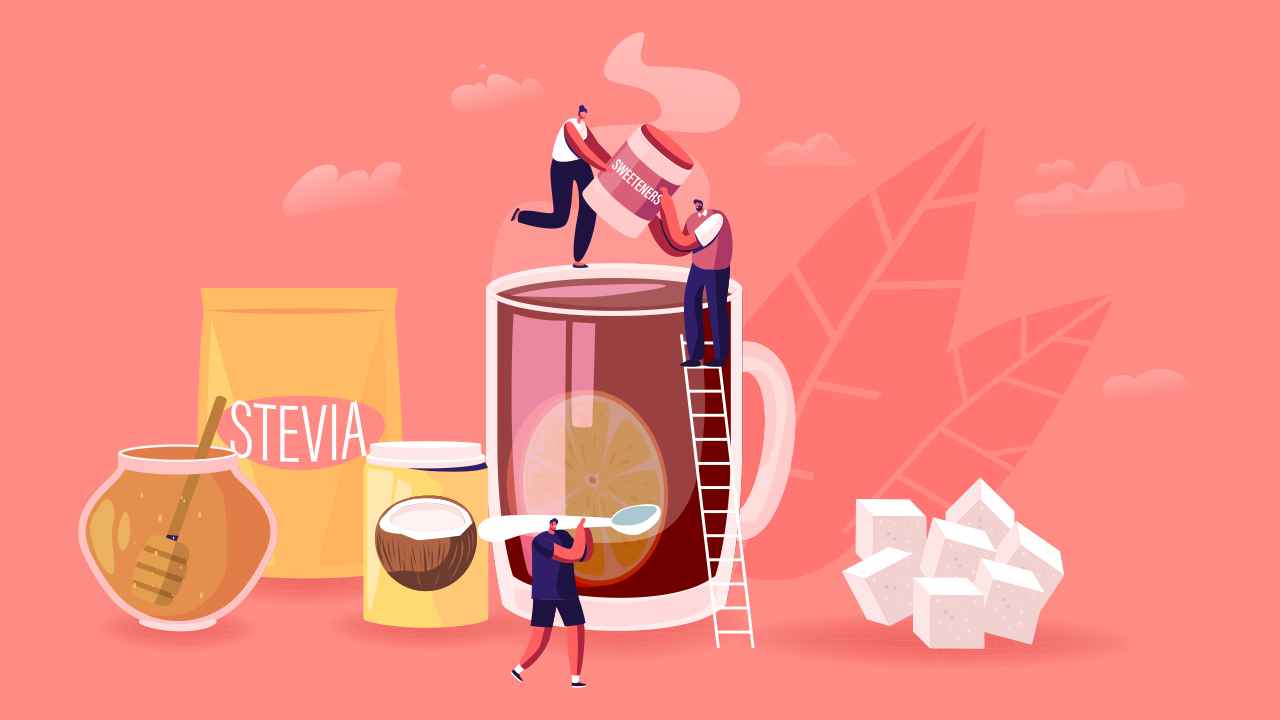 What are artificial sweeteners?

Artificial sweeteners are substances that mimic the taste and sweetness of sugar without increasing calories and other nutrients in foods. They stimulate the sweet taste receptors in the brain, without actually providing any calories. They also work as appetite suppressants and can help with weight management. Artificial sweeteners include aspartame, sucralose, saccharin, and stevia.

Also read: How to Avoid Sugar in Your Food?

Saccharin was the first artificial sweetener discovered. It is made up of chemicals o-toluene sulfonamide and phthalic anhydride.  It is around 200 to 300 times sweeter than sugar but has a slightly unpleasant metallic aftertaste.

Almost 85%-95% of saccharin that gets absorbed in the bloodstream is expelled through the urine. The remaining amount goes further down the digestive tract to be eliminated in the feces. The recommended daily intake of saccharin is set at 5mg per kg which means if you weigh 60kg you can consume up to 300mg each day.

Even though aspartame is an artificial sweetener, it contains 4kcal per gram and is made up of two amino acids  — aspartic acid, phenylalanine, and alcohol known as methanol. Methanol is absorbed and expelled from the body by the liver, while aspartate acid and phenylalanine are used for protein synthesis.

It is commonly found in beverages such as diet coke. It can also be found in ice cream, fruit juice, sports drinks, tea, etc. Some people believe that Aspartame may cause cancer or diabetes if someone is sensitive to it. However, studies have shown that this is not correct. The recommended daily intake of aspartame is 50mg per kg.

Sucralose is a sweetener that can be found in many food items. It is made up of sucrose and chlorine. It tastes like sugar but it is not broken down during digestion, and so doesn’t raise blood sugar levels. Most of the sucralose passes directly through the digestive tract to get eliminated in feces, and only a small amount gets absorbed to get excreted in the urine by the kidneys.

Sucralose is around 600 times sweeter than sugar, so only one teaspoonful gives you the same sweetness as two cups of sugar. Similar to saccharin the recommended daily intake of sucralose is 5mg per kg a day.

Stevia is a plant-derived sweetener. It is up to 300 times sweeter than sugar, so it can be used in cooking, baking, and other food preparations. Stevia is extracted from the leaves of the plant stevia rebaudiana, which is also known as the Brazilian sweet leaf. The leaves are dried or boiled into a syrup, which can then be flavored with sugar substitutes like monk fruit or erythritol.

The sweet-tasting components of stevia are glycosides, which are naturally present in the stevia plant. The glycosides don’t get absorbed and pass unaltered through the body to enter the large intestine, where it is broken down via hydrolysis to form steviol. The steviol is transported to the liver, where it binds with glucuronic acid to form steviol glucuronide and is excreted in the urine. The recommended daily intake of stevia is 4mg per kilogram.

Other studies suggest that eating artificially sweetened treats might create an excuse to eat more. So, an individual might assume that products containing artificial sweeteners would be less damaging to their weight loss goals and end up eating it more. This can lead to overconsumption and more calories are eaten overall.

Also read: Do You Need to Quit Sugar to Lose Weight?

Artificial sweeteners are safe to consume for people suffering from type-2 diabetes as they have minimal to no impact on blood glucose levels.

However, there is also evidence to suggest that artificial sweeteners like sucralose and saccharin may invoke a cephalic insulin response, an early low-level release of insulin by the body simply from the anticipation of incoming food by sight, smell, or taste. This may not be ideal for people suffering from insulin resistance.

For example, when you are consuming an artificial sweetener, the sweet sensing receptors on your tongue may send a signal to the brain to release small amounts of insulin to digest them because the body does not know the difference between the sweetness from sugar and artificial sweeteners.

That being said, research on the effect of artificial sweeteners on insulin response isn’t conclusive. Therefore, it is best to speak to your doctor to find out about its effect on your individual condition and to safely implement any of the sweeteners in your meals.

Artificial sweeteners are generally deemed safe to consume. However, excessive consumption may lead to bloating, flatulence and diarrhoea. Aspartame is known to be an allergen for people with phenylketonuria. Phenylketonuria is a genetic disease that can cause serious complications like intellectual disability, blindness, seizures, muscle spasms, etc.

Should you replace sugar with artificial sweeteners?

There are pros and cons to artificial sweeteners. If consumed in moderation, they may assist some people to lose weight and they can also be included in the diet of a diabetic person. However, there are also concerns about overconsumption of food that they are added to.

Whether or not you should replace sugar with artificial sweeteners comes down to individual choice. If you have been using sugar in limited amounts, such as not more than six teaspoons a day all your life, feel healthy, and are happy with your diet, there is no reason to change anything. However, it is important to note that these six teaspoons of sugar can also come from other sources such as processed foods, sweets, or beverages and aren’t limited to just table sugar.

But keep in mind that these natural sweeteners have the same calories as sugar and initiate an insulin spike in the same way. So, you may need to limit or avoid them if you are trying to cut calories, or suffering from type-2 diabetes.

Overall, excessive consumption of sugar or artificial sweeteners has negative health implications. This is why it is important to watch your intake of processed food and read nutrition labels for the amount of sugar or sweetener a product contains. If you are including sugar in your diet, make sure you’re consuming less than six teaspoons a day, as recommended by the World Health Organisation (WHO).

Also read: Let’s Talk About Sugar: Is It Bad for You?

It’s also important to remember that sound health requires a holistic approach. Including artificial sugars or stopping sugar altogether, won’t have an impact on your health alone unless you also focus on eating healthy, sleeping well, and getting adequate physical activity.

How Much Weight Loss Is Good for You?