read Are Fad Diets Worth Their Weight?

Are Fad Diets Worth Their Weight? 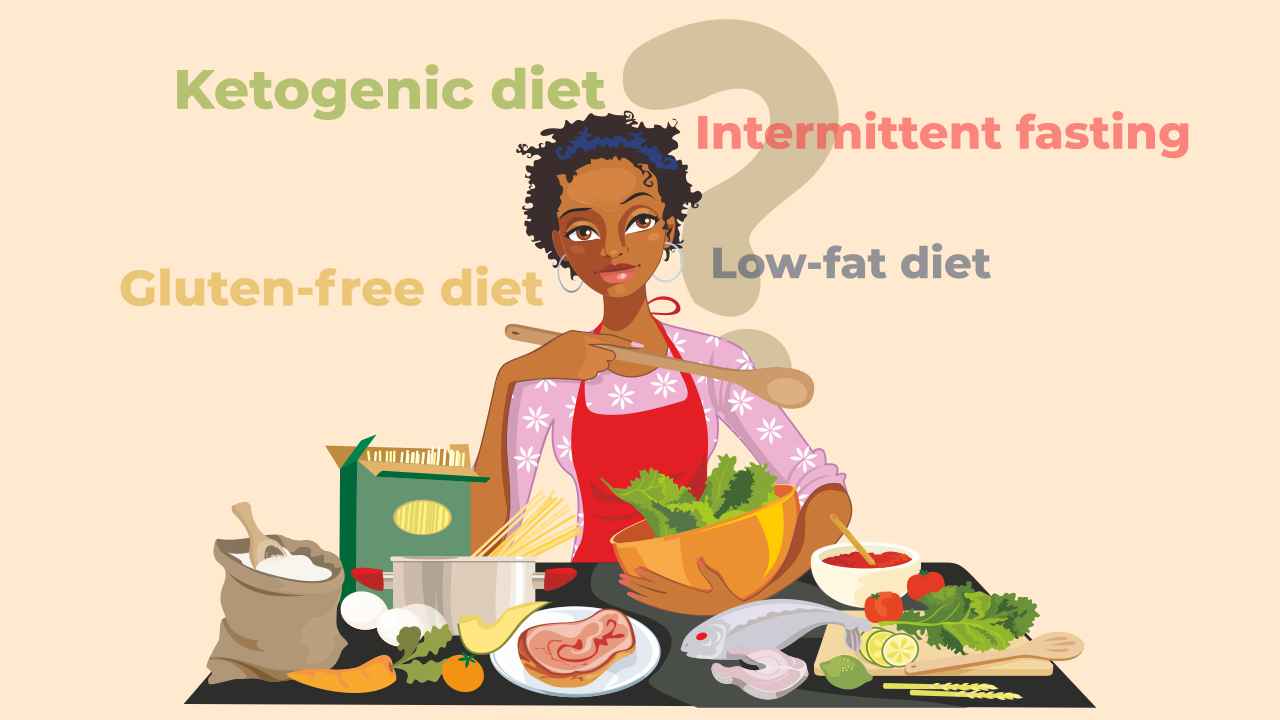 You have a big event such as a wedding or a birthday party coming up in a few months. You feel the need to get in shape for it, and find that you do not have enough time to lose weight through conventional diet plans and regular exercise routines. So, you opt for some desperate measures.

You start surfing the internet, browsing social media platforms, and reading magazines to find a way to lose weight quickly. You come across dozens of posts, articles, and advertisements for all kinds of diets claiming to be the holy grail of weight loss. Then, you decide to pick the one endorsed by a charismatic and beautiful model, follow it religiously, and lose some weight. However, along with weight loss, you tend to lose energy and upset your digestive system, metabolism, and mental health in the process. The reason behind it all is the fad diet you were on.

What are fad diets?

Fads are a craze, practice, or interest followed for a time with exaggerated zeal. So, a fad diet gains popularity for a short duration as a fashionable trend and fades away once a new one finds the spotlight. This could set you up on a cycle of yo-yo dieting.

They are endorsed by testimonials from the so-called experts. These weight-loss plans rarely help you over the long haul and may lead to health problems.

How to spot a fad diet

A fad diet plan is the one that:

Here are a few fad diets for weight loss that have gained  popularity across the world:

In a typical keto diet plan, the dietary macronutrients comprise 55% to 60% of fat, 30% to 35% of protein, and 5% to 10% of carbs. Specifically, in a 2,000kcal per day diet, carbs amount up to 20g to 50g per day, which is very low. Carbs are the main energy source for the body. Their deficiency forces the body to break down fat into ketones and use them as the primary source of fuel.  Hence, this diet is known as the keto diet.

Pros: Keto diets have been used for managing epilepsy, a disorder characterized by seizures, for over 100 years. More recent research indicates their effectiveness in facilitating short-term weight and fat loss.

Cons: A few keto diet side effects include an upset stomach, headache, and fatigue, which is known as keto flu. You may also experience moderate to severe constipation due to the strict restriction of most high-fiber foods. Following this diet over the long term may make your body deficient in vitamins A, C, K, and folate, and increase your risk for kidney stones and liver disease. A keto diet plan for weight loss may also adversely affect your athletic performance, especially during high-intensity exercises.

IF has been followed for thousands of years as an integral component of religious practice. Typically, it refers to a period of voluntary abstinence from food. However, these days, IF regimes have gained considerable popularity for weight loss. Generally, IF involves restricting energy intake for two to three days per week and eating freely on the remaining days, resulting in an overall calorie deficit. Time-restricted IF variations involve eating only during certain hours of the day.

Pros: Research suggests that IF may help you lose a significant amount of weight over a short time mainly due to calorie restrictions. It may also lower your blood cholesterol levels.

Cons: Many people find it hard to stick to long periods of stringent calorie restrictions. Some side-effects like extreme fatigue, lack of concentration, light-headedness, headaches, and constipation may occur when you fast.

Low-fat diets are in which less than 30% of the calories come from fat. This form of fad diet started during the nineties. Although the fat scare has waned to a great extent, many people remain wary when the word fat is mentioned anywhere on food labels.

Pros: Restricting fat in your diet may lead to short-term weight loss. Limiting foods rich in saturated fats may also decrease your risk of heart disease and hypertension. So, following a high-protein low-fat diet may be useful in this regard.

Cons: People tend to lose less weight when on low-fat diets compared to higher-fat diets in the long run because fat tends to keep you fuller for longer. Following low-fat diets over a long duration may result in the deficiency of essential fatty acids and decrease the absorption of some vitamins in your body.

Another major problem with low-carb low-fat diets is the over-consumption of low-fat food products. The fat in them is replaced with large amounts of refined carbs such as sugar, that increase the risk of metabolic disorders.

A gluten-free diet involves eliminating foods that contain the protein gluten, such as products made from wheat, rye, barley, and oats. This diet is an absolute necessity for people with celiac disease or gluten intolerance. However, lately, it is being promoted as the one-shot solution to weight management and good health.

Pros: One of the key gluten-free diet benefits is a significant reduction in gastrointestinal issues, such as abdominal pain, diarrhea, unintentional weight loss, and constipation in patients with celiac disease.

Cons: There is no scientific evidence, which indicates that a gluten-free diet plan is exclusively for weight loss. Gluten-free grain products like bread and cereals are often low in B-vitamins, fiber, iron, zinc, and potassium. So, a gluten-free diet may increase your risk for nutritional deficiencies. In addition, gluten-free products are about two to three times costlier than their gluten-containing counterparts.

Also Read: How to Avoid Junk Food and Eat Healthy Instead?

Why fad diets aren’t the answer

Fad diets are not the ideal solution because they:

Most fad diets lack sufficient scientific research to support their grandiose claims of weight loss. So, there is insufficient proof of the advantages of fad diets. A majority of these diets are not tested through long-term studies on a large enough sample size to draw definite conclusions on their benefits and ill-effects.

2. Do not produce lasting results

Even though there are some positive effects of fad diets in the short term, they are rarely sustainable beyond three to six months. Research suggests that about 75% of people regain all the weight they lost following a fad diet. In fact, some people may gain extra weight after discontinuing the diet.

Most people who get caught in the web of fad diets end up following one diet after the other, hoping that the new diet will provide the elusive results they have been chasing. This diet hopping may set up a pattern of yo-yo dieting in which the dieter loses some weight through rigorous dieting, becomes disillusioned by it, and falls back into his or her old dietary habits, thereby gaining the lost weight. If you have lost weight through such depriving diets and regained it, then you know how demotivating it can be. It can also trigger stress and emotional eating if you are mentally predisposed to these conditions. Fad diets may also poorly affect your relationship with food, as many of them attach negative connotations like “bad”, “dirty”, and “toxic” to certain foods.

Research suggests that severe energy restriction, which is the cornerstone of almost all fad diets, may significantly reduce your metabolic rate and leptin (satiety hormone) production and raise the ghrelin (hunger hormone) levels. So, your hunger may rise and your energy expenditure may decline in the long run.

5. May lead to health complications

Most fad diets are designed to drastically reduce the number of calories and macronutrients your body needs to function correctly. This nutrient deprivation may result in fatigue, lethargy, constipation, and long-term health complications like gallstones, fatty liver, and kidney diseases.

Elimination or severe restriction of certain food groups and nutrients may cause a deficit of essential macro and micronutrients in the body. This may lead to nutritional deficiency disorders like anemia, scurvy, and pellagra.

6. May cause muscle breakdown

You need to eat a sufficient amount of protein to maintain your muscles. Moreover, it is essential to consume an adequate amount of carbs to ensure that the dietary protein is not used for energy production.

So, even though these diets may bring about rapid weight loss, most lost weight is muscle mass rather than fat mass. The loss of muscle further reduces the metabolic rate and can make weight loss more difficult.

So, what is the alternative?

As there are no promising long-term benefits of using fad diets, here are a few ways to come out of the fad diet cycle:

1. Change in behavior and attitude is key to sustained weight loss. So, do not attach the need to get fit just for a particular event; understand that it is necessary to live a fit and healthy life.

2. Set achievable goals. Aim to lose about 5% to 10% of your weight by starting to lose half to 1kg per week.

3. Consult a nutritionist or dietitian to learn about your nutritional needs and how to plan your meals accordingly.

4. Follow a sustainable diet plan that includes all essential food groups and nutrients.

6. Keep a food diary and be watchful of your dietary habits and problem areas.

7. Include 30-60 minutes of moderate-intensity exercises, such as jogging, dancing, or cycling at least three to four times a week.

8. Sleep for at least seven hours each night and manage your stress levels.

Fad diets can be tempting, as they offer a quick fix to a long-term problem. However, just because a diet is effective for weight loss does not mean that it will provide you with long-lasting results. To achieve and maintain your weight loss goal, start implementing some of these tips, even if it is just one at a time. Every change you make will be one step in the right direction.