read What Makes Obesity So Dangerous: Causes and Effects 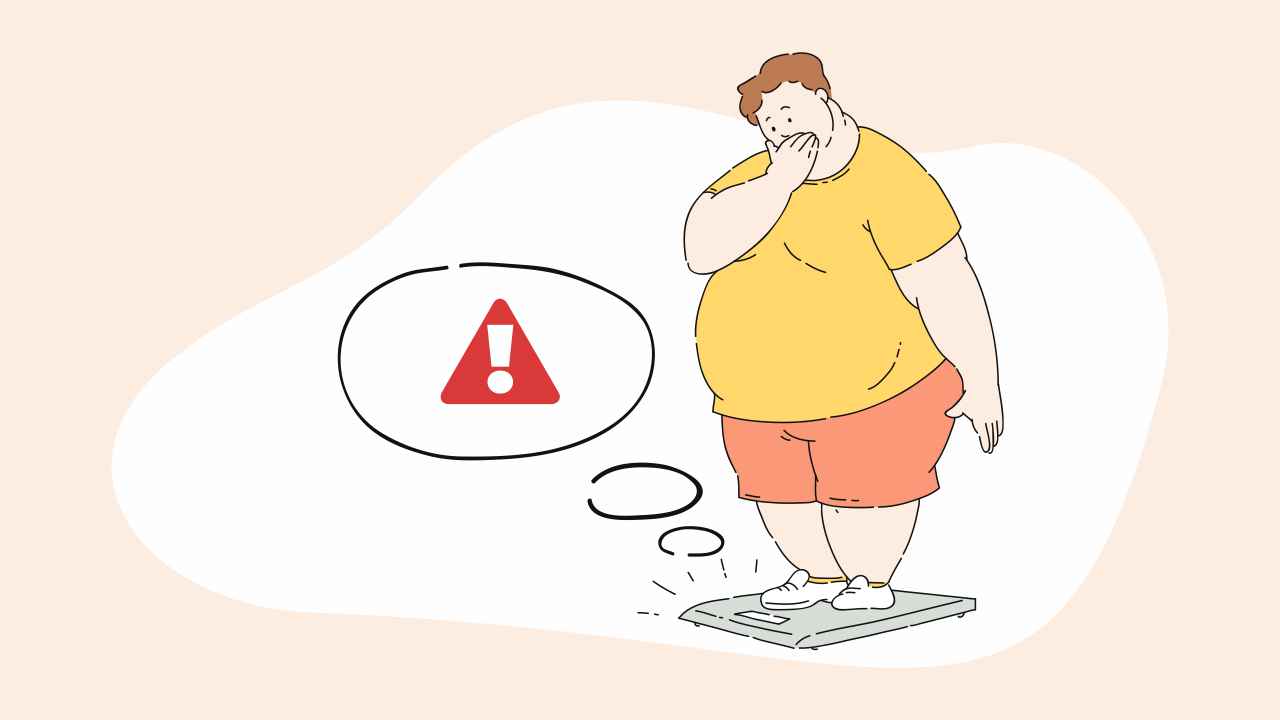 Obesity is a common and life-threatening medical problem. Given the rapid rise in the prevalence of obesity, it is important that we understand the causes of obesity that can influence the risk of developing the condition and its consequences.

The journey of getting fat

Childhood habits often stick around with people for the rest of their lives. So kids who indulge in sugary drinks and high-calorie processed foods are prone to weight gain and this trend is often carried into adulthood. In other cases, people who had been fit as children often put on weight at a later stage of their lives, especially when they confront the pressures of the professional world. Fitness takes a backseat and long hours in front of the screen, unhealthy food, and lack of exercise all add up to tipping the weighing scales.

Practically anywhere you go, be it shopping malls, theaters, or convenience stores, food that is usually processed and high in calories, is readily available. In addition, people prefer driving down to local stores instead of walking and have trouble finding time for the gym or to play a sport. Since everything has become convenient in so many ways, people have subconsciously adopted a ‘eat more, move less’ habit. While a sedentary lifestyle is part of the problem, consuming additional calories in the form of high-calorie foods is also a major contributor to obesity.

It is important to understand that contrary to popular belief, obesity cannot be attributed to excess consumption of food or lack of physical activity alone. It is a multifactorial disorder, which means that there are many other factors at play and not just diet and lifestyle. Evidence suggests that factors such as chronic stress, poor sleep, hormonal disturbances, genetics, and other medical conditions may also have an impact on the development of obesity.

Calorie intake refers to the calories that we consume in the form of food and drinks. These calories are utilized by the body to generate energy for performing essential functions such as breathing and digestion, as well as planned physical activities like exercise and unplanned physical activities such as fidgeting and talking. Regular consumption of foods high in unhealthy fats and simple carbohydrates such as processed foods, processed meats, and sweetened beverages can increase the risk of weight gain.

The more calorie-dense a food item, the more energy it gives your body. When there is an excess intake of calories or energy than what is burnt by the body, the body stores the excess energy in the form of fat. Over time, this energy imbalance can lead to the development of obesity.

Let’s look at some of the causes of obesity that lead to this health condition.

Consuming more calories than the body can burn can cause the body to store the excess calories as fat, which over time can lead to obesity.

One of the ways the body burns calories is by performing physical activities. Lack of physical activity or leading a sedentary lifestyle can lead to fewer calorie expenditure. Moreover, your daily physical activity can have an effect on the functions of hormones, which eventually has an impact on how food is processed by the body. For instance, unstable levels or regular spikes in insulin levels can increase the risk of weight gain and studies suggest that regular exercise can help regulate insulin levels.

Although not the only factor, your genes can influence the risk of weight gain. Genome-wide association studies have identified more than 50 genes associated with obesity, most of them with small effects. Processes such as food intake are regulated by the brain as a response to signals transmitted by hormones and other molecules in the body. There are certain variations or changes in these genes that can affect their activity and therefore, some variants of such genes have been found to be associated with the development of obesity. For example, research has identified a fat-mass and obesity-associated (FTO) gene, which is an obesity sensitivity gene. It is also suggested that variations in this gene are associated with parameters like BMI, waist and hip circumference, and body fat.

Some medications like specific antidepressants and corticosteroids can increase the risk of weight gain if not adequately compensated with a suitable diet and physical activities.

Stress can trigger the release of a hormone called cortisol, which plays a role in the initiation of the flight-or-fight response of your body. During this mode, regular bodily functions like metabolism are slowed down. While in the short-term this hormone and its effects are important for survival, if the stress persists, its effects can become harmful. Chronic stress or long-term stress can lead to excess production of cortisol, which can influence the carbohydrate and fat metabolism in the body, leading to an increase in appetite, sugar cravings, and storage of fat in anticipation of future energy needs. This might trigger excess consumption of fried foods or sugar-dense foods, leading to higher calorie intake.

You may have heard time and again how important it is to get a good night’s sleep. But did you know that sleep also plays a crucial role in helping you maintain body weight? The hormones leptin and ghrelin help in regulating your appetite. Lack of sleep can affect the production of these hormones, which may cause increased feelings of hunger. This may promote overeating, eventually leading to weight gain. Furthermore, poor sleep has been linked to lower levels of growth hormone and increased levels of cortisol, both of which have been associated with obesity.

Several socioeconomic factors also play a role in the development of obesity. Lower socioeconomic conditions may pose challenges like lesser access to healthy foods like proteins, fresh vegetables, and fruits.

Abdominal fat: Why is it harmful?

Any kind of excess fat in the body can be bad, but abdominal fat can be more harmful. Let’s understand why.

There are two forms of abdominal fat — subcutaneous fat and visceral fat. The former is present in the fatty tissue beneath the skin and the latter is located around the internal organs. Of the two, visceral fat poses a higher health risk. According to research, abdominal fat cells are metabolically active, ie, they produce hormone-like substances, which impair the body’s response to glucose. As a result, glucose is not metabolized properly and gets converted to fat and substances that harm the blood vessels. In most cases, this leads to the development of diabetes.

Visceral fat is associated with a syndrome called Metabolic Syndrome, which consists of obesity, hypertension, insulin resistance, and type-2 diabetes. The presence of any one of these conditions predisposes an individual to all others if no corrective steps are taken in time.

Lipotoxicity is another reason that could be attributed to the harmful effects of visceral fat. Visceral fat cells release their metabolic products into the blood. These products are eventually carried to the liver, pancreas, kidneys, and heart.  Since the cells of these organs are not designed to store fat, this can result in malfunctioning in terms of glucose and cholesterol metabolism. The accumulation of fat in the blood vessels of these organs also compromises the blood supply to these organs, causing more damage and deterioration of their functions.

What are the effects of obesity on health?

A healthy body weight plays a crucial role in the efficient functioning of many body parts or organs including your bones, muscles, and heart. So when you have excess body weight, especially obesity, it may affect respiratory function, cardiovascular function, and mood regulation. If obesity persists over time, without appropriate intervention, its effects on these systems and functions can increase the risk of developing debilitating health conditions like type-II diabetes, cardiovascular diseases, and osteoarthritis. It can also alter your quality of life. Obesity may lead to other medical ailments like:

Obesity has a direct link with cardiovascular diseases. With an increase in body weight, there may also be an increase in blood pressure, LDL (bad cholesterol), triglycerides, and blood sugar. These changes put you at an increased risk of having a heart attack, stroke, and coronary heart disease. In fact, a study found that women with BMI higher than 30 had a 53% higher risk of early death from any type of cardiovascular disease than women who had normal BMI ranging between 18.5 – 22.9.

Also read: Heart: How to Prevent and Manage Cardiovascular Diseases

There is significant research that associates obesity with a higher risk of developing type-II diabetes. Studies suggest that fat cells, especially abdominal fat, tend to produce pro-inflammatory chemicals that promote inflammation. Inflammation is an important component of the body’s healing process, but when produced in excess, for instance as a result of obesity, it can over time impair the ability of cells to respond well to insulin. Insulin resistance can affect how the body metabolizes carbohydrates, which can lead to increased blood sugar levels, and eventually, the risk of developing diabetes.

Increased body weight places an increased load on the joints of the body such as the knee and the hip. The higher load increases stress, which may increase the risk of wear-and-tear of the tissues of the joint. This is an important contributing factor to the development of musculoskeletal disorders such as osteoarthritis.

Fatty liver refers to excess fat accumulation in the liver as a result of conditions such as obesity and high cholesterol. Fatty liver can also be caused by high alcohol consumption, but in its absence, it is termed as non-alcoholic fatty liver disease (NAFLD), and obesity is strongly associated with NAFLD. Although fatty liver disease is not fatal by itself, it can lead to liver cirrhosis, which is the permanent scarring of liver tissue that can eventually lead to liver failure.

Research has shown an association between excess body weight and lower pregnancy rate, higher rate of miscarriage, and a lower rate of success with procedures such as In Vitro Fertilization (IVF). Women with obesity have a higher risk of developing gestational diabetes, which has the potential to cause miscarriages and damage to the fetus. In men, obesity has been associated with alterations in testosterone levels, lower sperm counts, and lower sperm motility (movement).

Sleep apnea is a disorder, which causes one to repeatedly start and stop breathing during sleep. Obesity is considered to be a contributing factor to the development of sleep apnea. Excess fat deposits in the upper respiratory tract may cause increased pressure on the upper airways, resulting in excessive snoring, daytime sleepiness, and a higher incidence of depression and heart diseases.

Several studies have reported an association between obesity and mental health issues such as eating disorders, depression, and anxiety. Obesity can also have a negative impact on a person’s quality of life and many people with obesity tend to experience bias, stigma, and discrimination, which may contribute to mental health struggles.

Obesity is not a cosmetic concern but a complex disorder with many factors influencing it. Without appropriate intervention, it can increase the risk of developing other physical and mental health disorders, which can have a significant impact on one’s quality of life.

The Importance of Sleep and How to Sleep Better: Dr Amy Bender Answers Key Questions