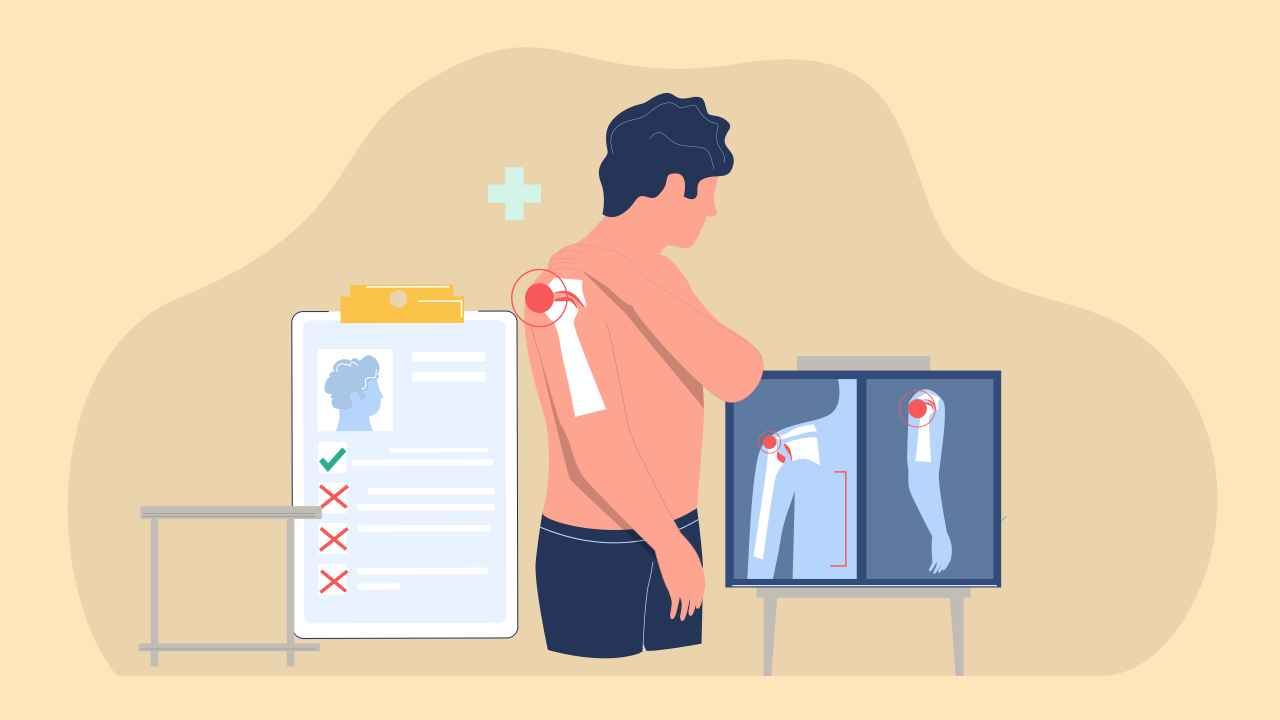 Upper body training typically involves either pulling or pushing external loads (weights) in vertical or horizontal planes. For instance, a seated shoulder press is a vertical plane pushing action, while a seated cable row is a horizontal pulling action. So, the shoulder joint and surrounding/supporting musculature is an extremely important physical area to accommodate these movement patterns.

Importantly, the shoulder can become increasingly compromised when there is poor exercise technique or improper overloading patterns while exercising. Figure 1 (below) details the shoulder joint and surrounding muscles more closely.

The four joints that comprise the shoulder are the acromioclavicular (AC), glenohumeral, sternoclavicular, and scapulothoracic joints. The primary movers of the shoulder joint include the deltoid, latissimus dorsi, and pectoralis major, while the accessory muscles, such as the rotator cuff complex muscles, biceps, rhomboids, and serratus anterior may assist in stabilizing the shoulder joint during various movements in vertical and horizontal planes.

What is scapulohumeral rhythm?

Before knowing about the common faults in exercises involving the shoulder, first, let us talk about what the scapulohumeral rhythm is. It is the relationship shared between the scapula (shoulder blade) and the humerus (upper arm). The two work synergistically. So, as the shoulder moves into abduction (think about lifting your arm to the side), the motion is contributed to by the scapula and the humerus.

Which are the common resistance-training shoulder injuries?

Most of the resistance-training shoulder-related injuries take place due to poor movement or exercise technique or when there is insufficient strength or range of motion. So, compensatory muscle activation patterns occur to overcome the deficiency in strength.

For example, in the case of poor strength/ muscle imbalances, if there is a weakness in the deltoid upon a vertical pushing action, the rotator cuff muscles, which are smaller and weaker compared to the deltoid, may work more to stabilize the shoulder above the head to let the movement occur. Some prevalent resistance-based shoulder injuries include muscle tears, soft tissue damage (to ligaments or tendons and surrounding supporting tissue), joint capsule injuries (either the labrum or bursitis), and peripheral nerve injuries.

Additionally, the evidence suggests that the most usual body areas of soft tissue shoulder injuries include the biceps, rotator cuff, and pectoralis major musculature.

How to preserve shoulder health while exercising

The high-five position of the shoulder is considered to be a particularly compromised position. When it is put under load, it may contribute to poor joint congruency, excessive overstretching of the anterior shoulder tissue, and overall instability. As such, exercises like lat pulldowns and behind the neck military presses may be poorly positioned from a shoulder health perspective. So, if you are a beginner, it is advisable to avoid doing these workouts until your shoulder stability and strength levels are improved.

Initial strength-building exercises, such as narrow hand position push-ups, seated cable rows, and supporting dumbbell rows are suitable for building base levels of upper-body strength. The objective of these workouts is to progress to more advanced shoulder positions in the horizontal and vertical planes.

If you are a well-trained person and are facing shoulder-related problems while performing horizontal-based exercises, then you may follow a technique called setting the scapula, which may help in any shoulder injury recovery. This method may improve shoulder mechanics and reduce the risk of shear (opposing) forces through the shoulder. Setting the scapula refers to pointing the scapula towards your back pocket by driving the shoulder blades down and into retraction, which means pinching them together. This technique will avoid excessive scapula movement, which will create a more stable position of the shoulder.

In other cases, such as during vertical pressing actions (overhead pressing), full scapula range of motion is imperative to accomplishing a lift. However, you need to alleviate aggressive shoulder positioning (ie, shoulder external rotation and 90° abduction during vertical shoulder-pressing exercises — the high-five position). You can do this by setting the bench back from vertical at 60° or 75° if the bench permits. This has been depicted below in (Figure 3). In addition, make attempts to push (or pull) from an anterior (in front of the head) position rather than behind the head/neck, which is a problematic position for the shoulder to be in.

Also Read: How to Train Safely and Avoid Injuries at Home

Avoid excessively wide hand-grip positions when pressing and/ or pulling from both vertical and horizontal postures. Instead, narrow grip (shoulder-width apart) hand positions or reverse/ supinated grip positions (where the hands are placed on the bar with palms up) may be highly beneficial for the shoulder, particularly during bench pressing. The reverse grip bench press should keep the shoulder in a position of approximately 45° of abduction, which is ultimately a safer position from where you can lift heavy weights.

The shoulder is a complex, extremely mobile, and the least stable joint in the body. The vast range of motion makes the shoulder joint prone to injuries and dislocation with sudden changes or poor form and technique during movements. So, it is essential to follow correct exercise techniques and progression while working out to strengthen the joint and maintain its function.