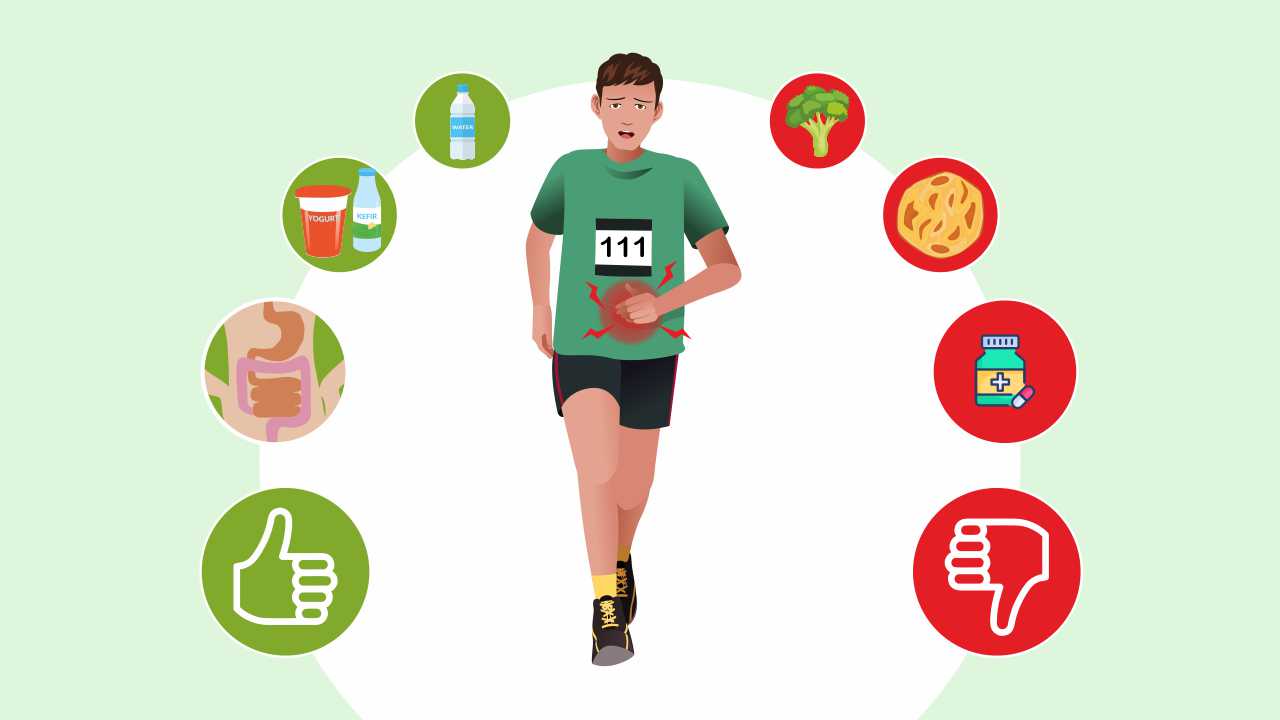 The gut is a vital organ for delivering fluid and nutrients during exercise. Runners may often experience digestive problems or gastrointestinal (GI) distress — referred to as stomach trouble. Research suggests that as many as 30%–90% of athletes experience GI complaints/runner’s stomach, which impairs their performance and training. Here, we briefly explore the causes and symptoms of GI issues that runners may suffer from along with some nutritional ideas to manage these concerns.

Causes and symptoms of GI issues

A major physiological cause of GI distress is the reduction in blood flow to the visceral organs during exercise, as well as decreased gastric motility (the ability of the gut to contract) and emptying. This causes increased water content in the gut and excess gas production due to the fermentation of food by bacteria. Moreover, you may notice impairment of the barrier function of the gut. These physiological effects are intensity-dependent, so they get worse if you exercise more. The gut can become more porous or leaky, potentially allowing pathogens to cross into the bloodstream. The decreased motility of the gut can also result in gastric reflux during exercise resulting in the backflow of stomach acid into the esophagus that typically causes heartburn.

Foods that contain highly concentrated carbohydrate solutions, fiber, protein, fat, and fructose are responsible for the worsening of GI symptoms. But there is a lack of complete understanding regarding this at present.

Lastly, mechanical factors include posture and the impact that you endure during the prolonged running activity. The repetitive gastric jostling during running causes mechanical trauma to the gut and is likely responsible for lower GI problems such as flatulence and diarrhea. The only known method to reduce these unwanted mechanical effects is by training and adapting to this stress over time.

From the perspective of symptoms, the most commonly reported GI complaints include flatulence, bloating, diarrhea, an urge to defecate, burping, acid reflux/heartburn, abdominal pain/cramps, and nausea/vomiting. In the extreme, marathon runners and long-distance triathlon competitors have been known to report blood in the stool in the hours following a competitive event. These symptoms can affect performance, not only during competition but also while recovery and adapting to training.

Following wise nutritional tips along with supplementation can aid in managing GI issues. This could be as simple as avoiding heavy meals just before your run. Apart from this, you may consider implementing these ideas:

Evidence suggests that supplementation with probiotics may help runners ward off GI symptoms. Probiotics are living microorganisms found in fermented foods (such as yogurt) and cultured milk. They offer beneficial effects for health when consumed in adequate amounts, but the effects seem to be strain-specific.

A study published in the European Journal of Applied Physiology from Liverpool John Moores University found that supplementation with probiotics for 28 days before a marathon race reduced the incidence and severity of GI symptoms in recreational runners. The probiotics consumed were provided in Lactis (CUL34), a commercially available supplement (tablet) containing the active strains like Lactobacillus acidophilus (CUL60), L. acidophilus (CUL21), Bifidobacterium bifidum (CUL20), and Bifidobacterium animalis subsp. Compared to a placebo group, GI symptom severity was lower during the final third of the race, an observation that could potentially help performance and maintain pace in the final phases of long-distance races. So if you wish to see any beneficial health effects, then the choice of strains is of utmost importance.

Also read: Nutrition Strategies to Prevent Bonking During a Marathon

More generalized nutritional strategies appear to emphasize avoiding large amounts of one source of carbohydrate during exercise (such as glucose drinks) and instead consuming multiple types of carbohydrate (glucose and fructose mixtures) to reduce GI discomfort. You may prepare these drinks yourself by using commercially available powders or buy them as branded products from a wide range of retailers.

Also read: How to Select a Sports Drink for Running

It is advisable to refrain from consuming high-fiber foods in the days prior to a competition/race/marathon as these items take a longer time to digest, and running after eating these foods may result in stomach discomfort.

3. Stay hydrated and do not consume certain medications

Prevent dehydration by consuming drinks that contain lower carbohydrate concentrations and avoid taking medications like aspirin and ibuprofen as they may increase gut permeability.

As per evidence, it is possible to train the gut to tolerate carbohydrate intake during endurance running.

A series of Australian studies reported that two weeks of repetitively challenging the gut daily with 30g of carbohydrate, where powders of glucose and fructose were dissolved in water in a 2:1 ratio after an interval of every 20 minutes during a running exercise testing protocol, improved GI symptoms and carbohydrate absorption. They also found improvement in running performance when compared with a placebo condition.

Research on the trainability of the gut is still in its early days, but initial signs suggest that it is possible to adapt to new nutritional strategies and training workloads using a process of trial and error. The most important message from the research, as it stands, is to test and retest your nutritional and training strategies to see what works and what doesn’t in terms of GI distress and performance.

How Can Runners with Flat Feet Avoid Injuries?