read Supplements: How Do Runners Benefit

Supplements: How Do Runners Benefit 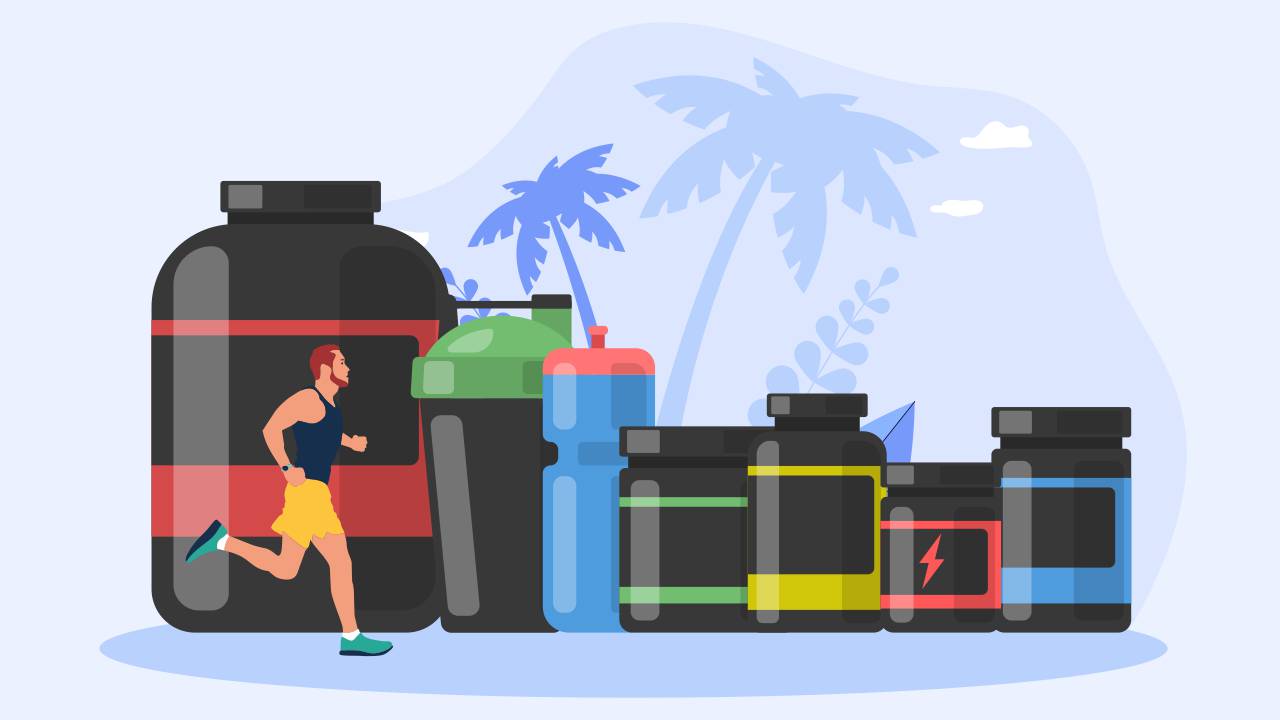 Exercise brings about physiological changes such as blood and nutrient demand, muscle micro-trauma, depleting energy stores, and generation of reactive oxygen species (stress-induced compounds known as free radicals). Each of these physiological outcomes affects performance in terms of muscle strength, power, and recovery. It is for this reason that supplementation may benefit athletes by reducing some of the harmful effects of exercise.

Runners should preferably focus on getting their nutritional requirements from wholesome foods, and be wary of excessive supplementation. However, here is a brief outline of key supplements, their benefits, and guidelines on dosage.

Running is an impact exercise and long-distance running cause muscle damage. Protein is required for muscle building and repair, and there is a need to check if adequate amounts of protein intake is appropriate, especially if the runner is a vegan or vegetarian.

The recommended protein requirement for runners ranges from 1.1g/kg–2g/kg of body weight. The lower value represents runners in the 5,000m–10,000m range with proportionate increase as you move from half marathon to marathon. For ultra-marathon, the requirement is as high as 2.0g/kg.

Protein as a supplement should be taken only if the source from foods is inadequate. In fact every attempt should be made to get your protein requirement from a wholesome diet. In case the amount of protein cannot be fulfilled by food intake, one could supplement using whey or casein protein supplement.

Milk has protein content and whey is an easily digestible component, which makes up 20% of the protein in milk. Whey protein is rapidly absorbed in the bloodstream. The balance 80% is casein, which is absorbed very slowly. Whey is also rich in Branched-Chain Amino Acids (BCAAs), and is thus a better alternative than casein when used pre- or post workout because of its fast-acting properties. However, casein too, is useful as it provides sustained amino acids for muscle repair, for example when it is had before bedtime.

Also read: Quality Protein: A Guide for Vegetarians and Vegans

It is the world’ most popular pharmacologic substance and is consumed in coffee, soft drinks, and chocolate. Caffeine is absorbed very rapidly in the gastrointestinal tract and achieves peak plasma concentration in about 40 minutes. It has an effect on fat metabolism and the central nervous system. Caffeine is a well-researched and a known ergogenic aid because of its ability to decrease perceived exertion and increase time to exhaustion in endurance exercise.

In order to experience caffeine’s ergogenic benefit, the recommended dosage is about 5mg/kg–6mg/kg of body weight. This would amount to about 300mg–500mg of caffeine, which again could be consumed in three or four cups of coffee. The international Olympic committee has specified a limit to urinary caffeine level as 1.5mg/L, which would come about if you had 800mg of caffeine. It is important to note that there are potential adverse effects to consuming excessive caffeine by way of diuresis, tachycardia, and insomnia.

Omega 3s are nutrients that are found in food and help maintain the structure of cell walls in our body. They help the heart, lungs, blood vessels, and your immune system work efficiently. They are found in some types of fish such as salmon, mackerel, sardines, and tuna, and in nuts and seeds like walnuts, flaxseeds, and chia seeds.

Infection or injury can cause inflammation, and when inflammation persists, it can delay recovery. Omegas 3s reduce cytokines, which are linked to inflammation. Also Omega 3s enhance bone health by increasing uptake of calcium in the bones.

Vitamin D helps the body absorb calcium (Ca) from the intestines, and hence is important for bone health in runners. In addition, it plays a role in muscle contraction. It is reported that Ca deficiency may cause muscle cramps and there is anecdotal evidence that cramping may be prevented by increasing intake of Ca.

Just as muscle contraction is aided by the presence of calcium, muscle relaxation is aided by magnesium (Mg). While Mg’s role in exercise-related cramps is not clear, but again, there is anecdotal evidence that supplementing with Mg helps reduce cramps. It may be noted that excessive sweating results in loss of Mg, and deficiencies may further exacerbate this loss.

When runners train at high intensity or for extended periods of time, there is an excessive production of free radicals, which are highly reactive atoms and molecules with free or unpaired electrons. The body also produces molecules that can attach to these free radicals and hence scavenge them. If there is inadequate production of such scavenging molecules or anti-oxidants, there can be damage to muscle cells resulting in muscular weakness and fatigue. Hence, there is a need for supplementing with exogenous intake of antioxidants.

Vitamins C and E are antioxidants and provide support to the immune system, as well as fight damage caused by free radicals. The RDA for Vitamin C is 90mg with an upper limit of 2,000mg. For Vitamin E, the RDA is 15mg per day. It may be noted that Vitamin E is a fat soluble vitamin and hence one should be cautious about excessive supplementation with Vitamin E as it can cause toxicity. It is best to seek advice of a health practitioner for recommended dosage based on age and gender.

Nitric Oxide (NO) is a potent vasodilator (improves blood flow) and is produced from foods containing nitrates. Beetroot juice is known to have singularly high vasodilator properties. Increased NO production by way of supplementing with beetroot juice or its extract is known to provide the following benefits according to Allman et al in a paper titled “What else is in your supplement”:

There are many other potent supplements that are primarily in use at the competitive level. But, with increasing research on sports nutrition supplements, recreational runners are also turning to a wide array of race fueling and hydration products. In April 2019, the IAAF released a comprehensive guide to sports nutrition in order to allow athletes to make informed decisions on fueling and performance. The report specifies five supplements that have an evidence base and are well established. These five supplements are Creatine Monohydrate, Beta-Alanine, Caffeine, Nitrate and Bicarbonate. In addition to these, a sixth supplement was reviewed and added, namely, BCAAs.

Creatine is an amino acid that is found in dietary intake of animal products such as beef, mutton, pork, poultry, and seafood. Institutions such as the IOC, ACSM, and the International Society of Sports Nutrition, have acknowledged the performance-enhancing benefits of creatine supplementation. Research has proved that supplementation can increase creatine stores by up to 20% in meat eaters, and up to 40% in vegans. Performance is directly related to the amount of muscle creatine stores in the body.

The potential benefits of creatine supplementation include enhancement in the following;

The above benefits indicate that creatine monohydrate (CM) would best work to generate power in track and field events involving sprints such as 100m, 200m, 110 hurdles and 400m. This is also borne out in the guidelines given by the IAAF.

Based on bioavailability and effectiveness, CM is known to be the best form of supplement. There is a supplementation protocol to be followed, which involves a “loading phase”, where 0.3g /kg of body weight is taken in 3–4 doses through the day for five to seven days.

Thereafter, a maintenance phase is followed wherein CM is ingested post workout in a dosage of 0.03g/kg. While the above are general guidelines, it is best to work with a registered nutritionist to acquire ergogenic benefits in the best possible way, depending on the unique characteristics of the athlete and goal for performance.

Creatine supplementation can have harmful effects when not administered by qualified professionals. The following anecdotal claims of adverse events have been catalogued in the NSCA coach paper given under references.

Beta-alanine is a non-essential amino acid that is produced by the body. It is used by the body to produce carnosine, which acts as a buffer against the acidic environment resulting from lactate production and breakdown. An acidic environment prevents glycolysis, and results in fatigue. Hence, beta-alanine supplementation improves athletic performance by setting off a chain of reactions that reduce acid levels in the muscles. In other words it helps you to exercise longer at high intensities (which is when most lactate is produced) and increases time to exhaustion.

Based on the above, the highest intensities seen during fast glycolysis are in events that are middle distance ie 800m up to 5,000m. These maximum intensity events are such where anaerobic metabolism is predominant and impose limitations by virtue of exponential increase in blood lactate. Beta-alanine helps delay this mechanism.

The guidelines for intake of beta-alanine are 4g/day. If the workout is of a long duration, the higher end of the dosage is recommended. The supplement should be taken on a continuous basis, i.e., even on rest days. Skipping it for prolonged periods will reduce its efficacy.

As always, it is best to work with a registered professional for your unique requirements. Stout et al evaluated the effects of 28 days of supplementation with beta-alanine on 51 men in their late twenties by evaluating capacity at neuromuscular fatigue threshold and suggested that “b-Ala supplementation may delay the fatigue-induced during submaximal cycle ergometry, which may occur as a result of carnosine-induced increases in H_ buffering capacity.”

Amino acids are the building blocks of proteins, which are required for muscle synthesis and repair. BCAAs are essential amino acids, and have to consumed through a diet, as they cannot be synthesized by the body. There are three BCAAs: leucine, iso-leucine, and valine.

Leucine is an important amino acid as its presence in the blood stream sends out a message for protein synthesis, and hence its importance for muscle recovery.

When you train for a long distance race such as the marathon or an ultra-marathon, the body ends up in a calorie deficit during long runs. The body is in a catabolic state at such times, which essentially means that it breaks down fat and some muscle too, for energy. So, you could end up losing muscle mass because the muscle broken down is used as  a source of energy. BCAAs come to the rescue at such times because these amino acids help you maintain muscle mass.

BCAAs can be taken either before or after your run as they create an environment during the run that allows them to be used as fuel as they can be taken up directly by the muscles without being metabolized by the liver first. This, along with their ability to prevent muscle breakdown, reduces the onset of fatigue. After the run, the BCAAs stimulate muscle repair and help recovery.

The amount of BCAA to be taken depends on your gender, weight, and duration of run. It is best to get the appropriate dosage from a registered nutritionist, but general guidelines suggest between 10g-20g per day.

The guideline for taking L-Glutamine as a supplement is 5g/day-15g/day. However, long term supplementation effects are unknown, and it is advisable to take it under supervision of a registered dietician.

Sodium bicarbonate is known to buffer lactic acid when it accumulates in the blood during high intensity exercise lasting one to three minutes. The protocol is to consume it in capsule form to prevent nausea and diarrhea, about thrice a week.

However, when it comes to any supplement, needs would differ from person to person. So, it is important to note that these guidelines are generic, and should be followed only on advice of a registered dietician.

Can Lack of Sleep Make You Gain Weight?

Vitamins for Your Heart

How to Avoid Junk Food and Eat Healthy Instead?

How to Maintain Muscle Hypertrophy

How to Fuel for Long-distance Runs

Do Fat Burners Help You with Weight Loss?

Superfoods for Runners: How They Help Improve Performance

Role of Carbohydrates for Muscle Building