read How Can You Improve Your Running Speed?

How Can You Improve Your Running Speed? 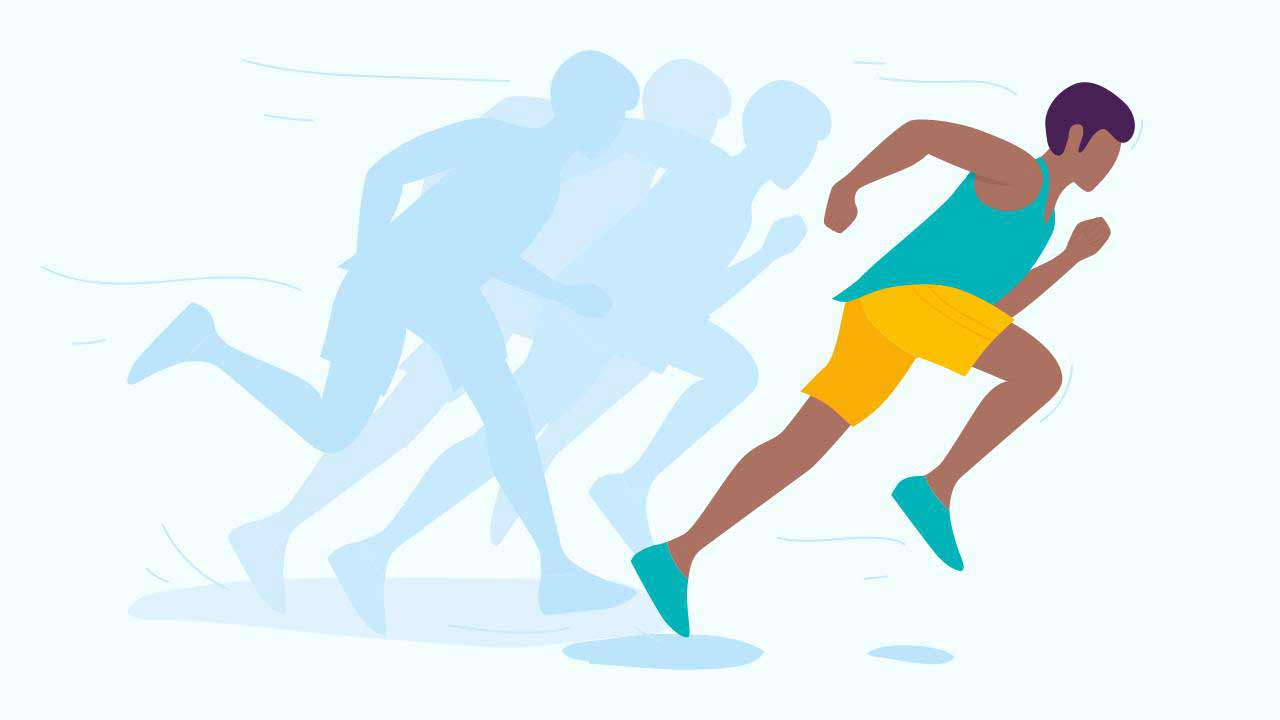 Every runner, whether they want to race or not, wants to improve their running speed. So, how does one go about it?

If you are just starting out and/ or are fairly deconditioned, your running speed would increase pretty much with any amount of running at any intensity. However, as you get fitter and thus faster, your training would need to be more specific to see continued gains (ie, increase in speed).

Before we get into the specifics of how to increase running stamina and speed in terms of workout type and other factors, it is important to note that body weight has a large influence in respect to running speed — especially, when it comes to uphill running. While many believe that most energy when running goes to forward propulsion, this is not the case.

Approximately 69% of one’s energy while running goes to supporting one’s body weight. The less a runner weighs (within a range), the more efficient they will be and thus the faster they are likely to go. You’d just need to look at elite marathon runners to see this in action. Therefore, if an athlete is substantially overweight, either from muscle and/ or fat, reducing their weight will help improve their running speed.

There are several exercises to increase running speed and stamina. Cardiovascular fitness level plays a role. For an absolute beginner who is deconditioned, losing fat weight and increasing overall fitness via a walk/ run program, is very effective. As you become fitter, the training methods need to change to continue to see improvements. The walk/ run program should shift to a solely running program with a focus on low heart rate training, so as to develop your aerobic capacity.

Once you have the aerobic capacity to run at least 30 to 40 minutes non-stop, adding periods of increased intensity into slow runs is recommended. The last step to increase running speed is to integrate specific high-intensity workouts such as intervals to continue to stress the body’s cardiovascular system. Doing these exercises can certainly be useful during different phases.

Now, let us look at some factors that play a role in increasing running speed.

Also watch: How to Breathe While Running?

The body comprises three different energy systems (phosphagen, glycolytic, oxidative) that work together to provide energy, based on the particular intensity at any given time. It is important to note that the type of energy system being used is based on the intensity that one is exercising at. Each of these energy systems can be trained by targeting specific intensities.

The phosphagen system is utilized when the body performs very high-intensity efforts such as all-out short sprints. This system only has enough energy to last for 10 to 15 seconds. The glycolytic and oxidative systems work together to provide energy, and the system that is predominately being utilized depends on the intensity level (glycolytic = higher intensity, oxidative = lower intensity).

Training at relatively low intensities (oxidative) elicits physiological adaptations that increase the body’s ability to deliver oxygen to working muscles and convert more energy from food to energy that the body can use.

So, as far as improving your running speed goes, it is important to train at various intensities.

It doesn’t take a rocket scientist to notice that the form of an elite marathoner is different from that of a recreational, less trained and much slower marathon runner. This is of course not to say that non-elite runners all have poor form — that is certainly not true. However, as one’s running form is correlated to how long someone has been running, often new runners are the ones with poor form. While there are many areas of running form that can lessen your speed, the three most common ones include:

This refers to how a runner bounces a lot when they run. While there will always be some degree of vertical movement of the runner, the focus should be on forward propulsion while reducing vertical oscillation A vertical oscillation of five to 10 centimeters is generally considered a normal range.

Running with a slightly forward lean (two to three degrees) originating from the ankles is considered good form. However, it is not common to see runners who lean excessively forward or rearward while running. Ideally, a runner’s torso should be directly above their legs (ie, center of mass or COM). The more deviation there is from one’s COM, the more energy will be spent in maintaining the posture. Forward propulsion, therefore, may be compromised.

It’s widely believed that the longer a runner’s stride, the faster they will be. This is only true if one can maintain a long stride and a fast stride rate — which is a near impossibility for most runners. This form often looks like bounding and is extremely inefficient. While a runner might be able to keep this form up for a few hundred meters, it is not sustainable for a long distance. It also usually goes hand-in-hand with a high vertical oscillation. An overly long stride, especially in front of the body (often termed, over striding), puts a lot of stress on the hamstrings. This increases the chances of injury.

From a biomechanical standpoint, the body is nothing more than a bunch of levers held together by connective tissue. When most people think about what it takes to run faster, it is usually in the context of solely running at high intensities. However, this is only part of the equation.

There are two main spring systems that, when stiffened, can increase the speed of a runner and thus reduce the reliance on the cardiovascular system. They are the Achilles tendon and the foot arch. Think of these two body parts as rubber bands. The stiffer a rubber band, the farther it will go when stretched and released. Conversely, if the stiffness is less, the lesser it will travel. Thus, if you strength train to stiffen these two spring systems, you can improve your running economy and also get faster.

While there is a genetic component in respect to the stiffness of the Achilles tendon and foot arch, below are several exercises that can strengthen these two areas.

Calf raises: Stand with the balls of the feet at the end of a step, then slowly raise your heels up so that your heels are elevated as high as possible. Slowly return to the starting position.

Hops: In this running exercise to increase speed, jump in place with the same form as you would have done using a jumping rope.

Towel crunches: From a seated position, place a towel under your feet, and curl your toes under your feet while doing this endurance training exercise.

Single leg stands: Stand on one leg in your bare feet. This will require your foot arch to tighten to maintain stability. Aim to do this sprint workout for speed for 20 to 30 seconds per foot.

How can you train to run faster?

Training at various intensities is the correct way to not just improve your running speed, but also to get fitter. However, once a runner has run enough so as to be considered to be in good cardiovascular fitness — typically six to 12 weeks — there are two intensity exercises to improve running speed that give the most bang for the buck.

From a physiological standpoint, the purpose of this running speed workout is to raise one’s LT, so an athlete can run for longer periods at a high-intensity level. These workouts are typically done twice a week.

Called VO2 Max intervals, these are performed at 95% to 98% of the maximum heart rate and are typically two minutes or less in duration. These workouts aim to increase the maximum amount of oxygen a runner can utilize. These can be done on flat surfaces or uphill. Most intervals are structured (for instance, two minutes at an exertion level of 10, followed by a two-minute easy walk, repeated three more times), while some are unstructured. In the world of running, they are called “fartleks”, which means speed play in Swedish. Intervals are typically done one to two times per week.

Both VO2 Max and LT are interrelated and pertain to running performance. VO2 Max is the absolute highest intensity that an athlete can perform at from an aerobic standpoint. LT represents the percent of one’s VO2 Max, which they can perform for sustained periods of time. As you can see, in order to run faster, both need to be increased.

Here are some running tips as per form and fitness that will help you run faster.

1. Run as erect as possible with a slight forward lean of two to three degrees, originating from the ankles.
2. The feet should land directly under, or slightly in front of your body. The focus should be on extending your legs behind your body to maximize your forward propulsion.
3. Keep your head straight and eyes looking forward, not down.

1. As your fitness increases, increase the intensity of some of your runs.
2. Develop your aerobic fitness by integrating slow runs that increase in distance. These should be performed three to four times per week.
3. Get enough rest during the week. The more intense a workout is, typically the more recovery is required.
4. Reduce your fat weight.
5. Increase your LT via tempo and fartlek runs.
6. Increase your aerobic capacity via short, interval workouts.
7. Integrate a strength training program that focuses on your core and leg musculature to increase your power.
8. Stiffen your Achilles tendons and arches of your feet via strength training.

As you see, there are multiple methods in which you can train to run faster. But don’t forget that running is also fun — so push yourself, but not so much that the sport feels like a chore. Slow and steady does the trick.